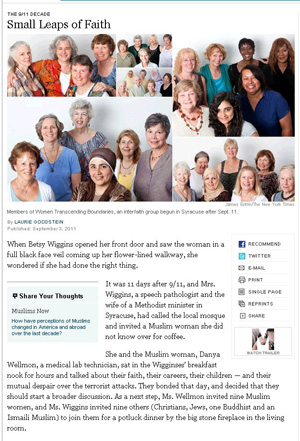 Our unique group has gotten a lot of attention since we began in 2001. One day a woman in Egypt called her friend Danya Wellmon (WTB’s co-founder) and said she saw a TV story about WTB in Egypt. We were on CNN International!

Our 2011 A-OK! Acts of Kindness Weekend activities drew the attention of national news media who were looking for stories about sustained grassroots interfaith work on the tenth anniversary of the 9/11 attacks.

We’ve been chronicled in multiple media both at home and nationally; here’s a partial list:

The Interpreter, a national magazine for United Methodists

Fill out a membership form online