WTB began in September, 2001, with the heartfelt conversation of two women over coffee in Syracuse, New York. Betsy Wiggins had been reflecting on a recent discussion at church about how to discourage discrimination against Muslim women after the 9/11 tragedies. She called the Islamic Society of Central New York asking if Muslim women needed transportation, grocery shopping or other help. That led to an invitation for coffee with Danya Wellmon, who was one of the women leaders at the masjid (mosque).

As Betsy and Danya sipped coffee in the intimacy of the breakfast nook in Betsy’s home, a friendship blossomed. Both wanted to continue the conversation and expand it to their friends. Each invited nine women to Betsy’s house two weeks later.

The women who attended that get-together in Betsy’s home came from Algeria, Bangladesh, Egypt, Jordan, Pakistan, and the U.S. They remember the day as a buzz of chatter, a feast of international foods and warm sharing of similar stories and feelings. Few had ever met, yet they felt they had so much in common. Women Transcending Boundaries (WTB) was born!

Awareness of WTB spread by word of mouth as women invited women, and they soon outgrew Betsy’s home. The group began meeting monthly, hosted by various places of worship. The first meeting outside Betsy’s home was at DeWitt Community Church where the women marveled at the creative embroidery of several women who made Chrismons, cross-stitched ornaments of religious symbols, to hang on a Christmas tree. Later at Congregation Beth Shalom they saw the sacred texts and learned Jewish traditions. And imagine sitting in this Jewish synagogue as you hear a Muslim woman recount her pilgrimage to Mecca for the Hajj! WTB women walked meditatively through a labyrinth at Trinity Episcopal Church during another meeting. That seemed appropriate for WTB because we are all on different paths, but working toward the same goals.

The women came to know each other better during this first year. Attendance ranged from eight to 80! 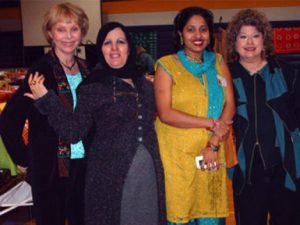 During the second year WTB moved meetings to Jowonio School and integrated some small group discussions in the meeting agendas, creating a safe space to share deep concerns. Our educational programs covered life cycle events from birth to death, such as marriage rituals and services for the dead. Women from the Buddhist, Christian, Jewish, Muslim and atheist traditions talked intimately about what spirituality means to them. Another time the group used a Quaker meeting format to share concerns for local Muslims (after a federal raid on dozens of Muslim homes) and the pending war in Iraq.

In 2002-03 WTB also put its concerns into action and began service projects in literacy by developing training materials in Urdu and raising nearly $8000 to build a school in Pakistan.

WTB women began gathering outside of the monthly meetings. Several joined the Muslim sisters in the breaking of the Ramadan fast at the Islamic Society. In the summer, WTB hosted a potluck supper for a group of women professionals from Russia.

In the first two years WTB funding came from the donations of WTB women and a $500 grant from a Muslim women’s organization. A generous person who believes in the cause of WTB (and prefers to remain unnamed) gave the money for this website. In fall, 2003, WTB instituted a modest membership dues ($10) to help cover some of our operational expenses. 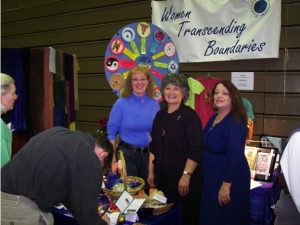 A study of Women Transcending Boundaries by a Syracuse University graduate student gave us insights about how we need to grow and change. We changed our organizational structure to make it more inclusive and wrote bylaws. We crossed more boundaries to reach out to women from other diverse traditions. We gained international media attention never anticipated. We continued to meet monthly at Jowonio School with programs designed to both learn more about each other and share about ourselves.

A second International Fundraising Dinner at Temple Society of Concord drew a packed room and we raised more money for IBTIDA (our total is over $13,000) and for the Literacy Volunteers of Syracuse. Our service projects expanded to more international and local projects to help women, children and disaster victims. Each meeting we welcomed 3-5 new members and the leadership team expanded. In 2005 we began cooking classes where we taught each other our favorite ethic and family recipes. Several women formed a Book Club and met monthly to discuss a book of interest to the group.

Peace Action gave WTB an award in 2005 for its boundary-crossing work. Co-founders Danya Wellmon and Betsy Wiggins turned over leadership to Jan Garman, president, and Ann Eppinger Port, vice-president, along with a Council of 13 women who guide the organization. Betsy and Danya both continued their strong involvement. 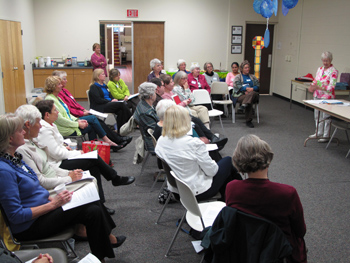 WTB continued to grow and attract new women from other traditions and cultures. Our monthly meetings averaged 50-60. We attracted new women by word of mouth and our booths at the Plowshares Crafts Festival and the Westcott Street Fair. We added a woman from the the Baha’i tradition to our leadership team. Programs included introductions to Jainism, Sikhism, Baha’i and Native American traditions. We learned about women in Ghana and heard five women share their personal faith stories.

What a fabulous time we had as we packed the room to overflowing for our Third International Dinner! And we raised more than $8200 to help women both in central New York and around the world. Erica Tavares from Women to Women International touched us with her stories, such as the woman who got aid to buy a goat. She carefully raised it, mated it and sold the offspring so she could buy food for her family and, a luxury — sending her daughters to school. Syracuse University Chancellor Nancy Cantor complimented us with, “WTB is one of the most impressive grassroots organizations I’ve ever seen.” None of us will forget the image of Madelyn Chadwick with her open umbrella as she urged us to reach out to women in transition living in the home her mother-in-law started, Chadwick House, Syracuse.

WTB served a midwife role in 2006 in helping a teen women of various religious backgrounds begin an organization similar to WTB. It’s called SUN, for supporting, uniting and noticing.

2007 saw an increase in a variety of service projects reaching out to refugee women and Syracuse underprivileged children. The leadership of the organization continued to expand with more women and more diversity. The book club blossomed and by now has read dozens and dozens of books about women, faith and social issues.

A “Journey to the Tent of Abraham” walk was a signature event for the fall of 2007-with women on pilgrimage through various religious institutions in the Syracuse University area in October. Ann Port stepped up as the new chair of the organization and helped the organization earn its 501(3)(c) status as a not-for-profit organization. This allows WTB to seek grants for funding special programs. Program topics ranged from stories of hope to learning about others’ faiths to a cultural day with food and crafts.

The fourth International Dinner in March, 2008, brought together more than 200 women for a festive evening of conversation and learning at Christian Brothers Academy. WTB raised money for programs locally and internationally who help women rearing their grandchildren. Speakers were Mary Anna Beer, who spoke about grandmothers raising children in Africa, and a local woman, Rita Fratto Rapp, of the Relatives as Parents Program.

An interfaith blood drive in March 2009 was a great success, attracting donors with the slogan “Together We Give So That Others May Live.” 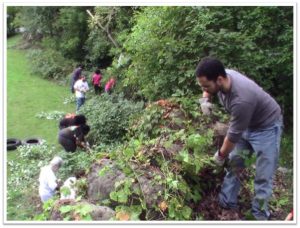 In 2010, we organized and sponsored a weekend of service projects throughout metro Syracuse with A-OK! Acts of Kindness Weekend, Sept 10-11, honoring those who lost their lives in 2001. Hundreds of people got involved through activity hubs across the city. They painted, constructed, baked, played and performed. It was a monumental effort that left the anchor team exhausted, but the sharing and results were well worth it. We repeated A-OK! Acts of Kindness Weekend in 2011 and 2012 and continue observing the date by joining with the Unity Church in Syracuse in their annual World Day of Prayer vigil.

Another new initiative is the annual World Interfaith Harmony Assemblies in collaboration with InterFaith Works, celebrating UN World Interfaith Harmony Week (the first week of February). Our annual gatherings, beginning in 2011, showcase representatives of diverse faith communities in the Syracuse area sharing readings, music, stories, and dances from their traditions.

December meetings have sometimes featured a potluck dinner at the Islamic Society of Central New York, with Muslim families joining people of other faiths around dinner tables for conversation. WTB members accompanied local youth participating in the Seeds of Peace program on a trip to the United Nations in 2014 and invited them to share about their experiences at one of our monthly meetings. Sycamore Hill Gardens in Marcellus graciously opens their 40 acres of gardens for a fundraiser the Sunday after Mother’s Day.

Other programs are ongoing. An International Dinner at Temple Concord in 2012 featured Barbara Shaiman as guest speaker, and “Journey to the Tent of Abraham: The Second Step” took place on April 28, 2013. We celebrated our 15th anniversary in November 2016 at a dinner at Temple Concord; the keynote speaker was Ruth Colvin.

In November 2016 Syracuse and Onondaga County were declared a “Compassionate Community,” the fruit of many years of efforts by WTB leaders Betsy Wiggins, Danya Wellmon, Daryl Files, and Gay Montague.

Our programming continues with a variety of topics at the monthly meetings and informal sharing at gatherings known as “schmais” at local restaurants.

In sharing about WTB, Betsy once said, “I thought all I was going to do was have coffee with Danya. I had no idea the women we invited would become a dynamic group. I didn’t realize what sort of response our little group would engender. I didn’t know we had touched a nerve in the community and that we would become a salon of discussion for many spiritual women with complicated questions.”

To read a fuller history of WTB, you can purchase the book, “Bringing Women of Faith Together After 9/11,” containing selected and edited notes from our meetings over the first 8 years. For more information click here.

No gatherings are currently scheduled.

Join us via Zoom for book club discussions: